We Are Criminal Appeal Attorneys 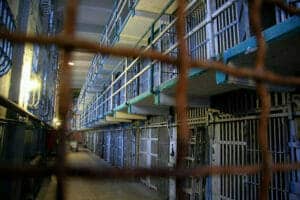 Clients who have been convicted of a criminal offense face an uphill battle attempting to overturn the conviction.

It takes knowledge and experience like that of Blizzard & Zimmerman Attorneys to prepare briefs that convince an appellate court to overturn these convictions.

Clients who face this battle can have confidence in the skills and abilities of Jacob Blizzard, Matt Zimmerman, and Sarah Durham when it comes to post conviction writs of habeas corpus. We’re proud to serve the greater Abilene, TX area and the state of Texas

An individual who has been convicted of a crime may appeal their case once a verdict has been issued. This means that they will be asking a higher court to review certain aspects of the case to determine whether there was any legal error.

An appeal is not the same as asking for a new trial because you don’t like the outcome.

Instead, it will determine whether the conviction or sentence was reached in error. The party who appeals the verdict must show the higher court that there were errors in how the original trial was conducted or how the verdict was reached.

No new evidence may be considered in a criminal appeal case. This means the court will reach its decision by examining the record of the lower court’s proceedings, including trial transcripts, anything admitted into evidence, and written briefs filed by both sides of the appeal.

While it can take weeks and months for a criminal appeal to be heard and decided, the appellant (the defendant in the previous case) must notify the courts and government of their intent to appeal very soon after a conviction or sentence. An experienced attorney can guide you through this process. 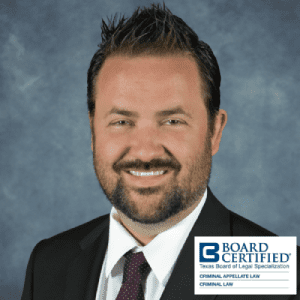 Attorney Jacob Blizzard is recognized by the State Bar of Texas Board of Legal Specialization as a Criminal Law and Criminal Appeal specialist. He is also Capital Murder Appellate List Qualified, 7th Judicial Region of Texas.

Unlike criminal defense lawyers who dabble in criminal appeals on an as-needed basis, we regularly research and prepare appellate briefs.

Unlike hiring a criminal defense trial attorney, a quality criminal appeals attorney spends time researching the intricacies of the law, appellate procedure, and harm analysis on appeal. Clients who have been convicted of a criminal offense face an uphill battle attempting to overturn the conviction.

It takes knowledge and experience like that of Blizzard & Zimmerman Attorneys to prepare briefs that convince an appellate court to overturn these convictions.

Clients who face this battle can have confidence in the skills and abilities of Jacob Blizzard, Matt Zimmerman, and Sarah Durham when it comes to post conviction writs of habeas corpus. We’re proud to serve the greater Abilene, TX area and the state of Texas. 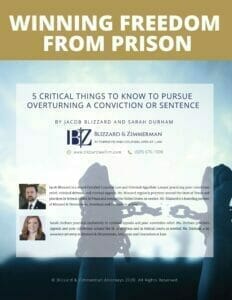 The guide called “Winning Freedom from Prison: 5 Critical Things to Know to Pursue Overturning a Conviction” gives insight into the writ of habeas corpus process here in Texas.

In this guide, Jacob Blizzard, a Board Certified Criminal Appellate Attorney, discusses:

Blizzard & Zimmerman Attorneys
4.9
Based on 115 reviews

Skylar Griffin
17:43 17 Jun 21
John Blizzard did a phenomenal job with my case. When there were times that I felt the case was going slow or there was... no new information, I was reassured by Blizzard's constant persistence for the D.A. to overlook my case. I was constantly informed when there were new information and updates regarding the case. 10/10 recommend John Blizzard for a defense attorney.read more

Jennavecia
18:26 10 Jun 21
I've always had a great professional experience with Jacob. I've gotten the best outcomes and have never been... disappointed. Shelley is amazing and sweet also remindful of appointments.read more

Rebekah Wolcott
13:05 29 May 21
Very caring and understanding. Matt Zimmerman and Kelsey LeBlanc were very helpful when it came to the details of my... divorce. They were very thorough and did not waste any time in completing requirements that my case had. They brought to light all of the unique/special circumstances that my case had and helped guide me through the entire process with minds, and advice, that were sound and clear. They also helped my parents get a family member out of a bad situation despite all of the surprises that case threw at them. They truly care about their clients, as they would ask me at our meetings how my parents and family member were doing. I hope to never have to use their services again, but if I did become in need of an attorney, I would go to them in a heart beat! And I would recommend them a million times over!read more

Patrick Stein
18:08 28 May 21
Matt Zimmerman did an outstanding job with my case. He always stayed in contact with me and put his best effort into... helping me get exactly what I need. I highly recommend him and his office.read more

Courtney Welch
18:20 20 Apr 21
Dax did an amazing job. I couldn't have asked for a better outcome. He stayed in contact with me and i was never left... guessing what was going to happen. He put in work until he got me what i wanted. Highly recommend using him.read more

Terry Mehojah
22:13 18 Apr 21
Dax, thank you so much. I was so very impressed with the way you handled things for my husband. I was even more... impressed with the way you dealt with me and the way you treated me as a person instead of talking down to as I have seen others do when I have had to deal with these types of situations. You were always very courteous and informative when we spoke. I cannot thank you enough. I will recommend you to my friend's should they ever be in need of your services. Again thank you so much.read more

Kent Chambers
20:03 11 Apr 21
Mr. Blizzard was very effective in helping to fix my situation. His communication was outstanding and he was very... forthcomming about all of my options. I would hire him again if I need an attorney.read more

Elizabeth Duran
01:44 04 Mar 21
Highly recommend Jacob and Matt! I was being wrongfully accused of abuse and neglect. I had no clue what to do. They... helped me with my appeal against the State. The outcome was a total success; judge’s decision was completely in our favor. I was stressed out & had so much anxiety being that I had never been through something like this but Matt always helped me feel confident on winning the case. He always kept me up to date with what was going on. He treated me with the upmost respect and showed that he truly cared about my case. On the day of court Matt did an outstanding job. I was very satisfied on how he handled it all. He made sure all the wrongs against me were made right. I will continue to always speak very highly of this law firm & all it’s staff. Without hesitation I would call them again if needed. -Elizabethread more

Ron Beverage
20:30 12 Feb 21
I was being taken advantage of by a large corporation and didn’t know where to turn. I called Blizzard and Zimmerman... law office and set up an interview. Mr. Zimmerman laid out the case and told me exact What to expect, he made sure I knew I was the driving factor. He reached a settlement with the company very quickly and to my satisfaction. I would highly recommend Blizzard and Zimmerman to anyone who needs legal help.read more
Next Reviews